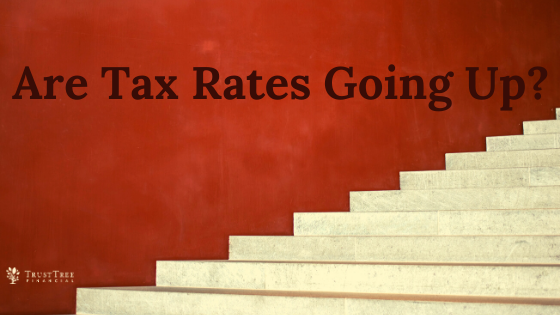 That seems likely with a $2 trillion American Jobs Plan (that could eventually cost trillions more) on the table to bolster America’s crumbling infrastructure and invest in R&D.

What could those tax hikes look like? Let’s consider the possibilities.

Though President Biden committed to not raising taxes on folks earning less than $400,000 per year, it seems hard to believe that he’ll be able to keep that promise with such a massive bill to cover.

Also, it appears that married folks filing jointly could find themselves facing a big marriage penalty if they get swept over the $400k threshold as a household.

One option on the table is a new auto mileage tax, which would raise money for highway infrastructure. Another is higher fuel taxes, which could increase what Americans pay at the pump. However, both proposals would be difficult to get through Congress, so they seem unlikely to come to fruition.

Bottom line: we don’t know exactly what will ultimately come out of Congressional haggling; however, it’s smart to prepare ourselves for potentially higher tax rates in 2022.

What could those look like? While I don’t have a crystal ball, the following changes seem very possible:

We’ll know more as the final deal shakes out, but it’s clear these possibilities make 2021 even more critical for tax and estate planning.

At the very least, the 2017 Tax Cuts and Jobs Act (TCJA) is set to expire after 2025. So there is a set date on the calendar and we know what the increases will be. Most taxpayers will see a tax hike then, unless some or all provisions are extended.

There’s a lot going on right now in Washington and we can’t know what the final resolution will be until all sides have their say.

Here’s another issue that most people aren’t thinking of, and it’s coming at them like a loaded freight train. Most Americans have been conditioned to think that adding money to tax-deferred investments (IRAs and 401ks) is the solution for retirement. While not a bad idea on the surface, this turns out to be a ticking tax time bomb! Money that is put into IRAs and 401ks will eventually result in a large tax bite, and people are going to be forced to pay it whether they want to or not.

See, a portion of those already belongs to the government. You might get a tax break in the year that you fund those accounts, but Uncle Sam will eventually come knocking. It’s just a question of how much, not when. Here’s a graphic of 100 years of U.S. tax rates for both the highest earners (blue line) and lowest earners (red line).

As you can see, tax rates have varied wildly over time. Your income that is distributed from IRAs and 401ks will be taxed at some level. Today the tax range is between 10 and 37%. Here are the 2021 brackets specifically:

Considering the amount of debt that the U.S. has created, it’s reasonable to expect that taxes could very well increase from these levels. Imagine if future tax rates jump to 50%, you’ve suddenly got half the money you thought you would have in retirement!

More likely are modest increases, for example moving from the 24% bracket to a 28% bracket. Nonetheless, people hypothetically need to consider whether to pay some taxes now or 4% more down the road. Investors should be considering tax-free accumulation tools to protect their assets from said taxes.

So what are some solutions?

I continue to be a big fan of Roth IRAs, either by contributing directly or by doing back-door Roth conversions. Of course, this creates a present-day tax consequence but realize that you’ll eventually need to pay taxes. A fair trade-off in my opinion.

Cash-value life insurance is another main (but under-utilized) way that people can take tax-efficient distributions later in life. This is done by taking policy loans, which are not “taxed”. Essentially, you are taking a loan from yourself. There is a borrowing cost, but nowhere near as high as what tax rates would be. This is a great way to accumulate wealth without tax liability in retirement.

I work with both very wealthy people and some not-so-wealthy. But the premise is the same, we cannot control what the tax situation will be but we can try and control our individual tax rate. There is a huge argument to pay some taxes now, versus a lot later.

Remember, laws and circumstances change all the time. When planning 20 or 30 years out, we have to make some assumptions. But then the rug can be pulled out from under us, and the rules may change. All we can do is stay on top and plan ahead as best we can.

Risk Disclosure: Investing involves risk including the potential loss of principal. No investment strategy can guarantee a profit or protect against loss in periods of declining values. Past performance does not guarantee future results.

This material is for information purposes only and is not intended as an offer or solicitation with respect to the purchase or sale of any security. The content is developed from sources believed to be providing accurate information; no warranty, expressed or implied, is made regarding accuracy, adequacy, completeness, legality, reliability or usefulness of any information. Consult your financial professional before making any investment decision. For illustrative use only.