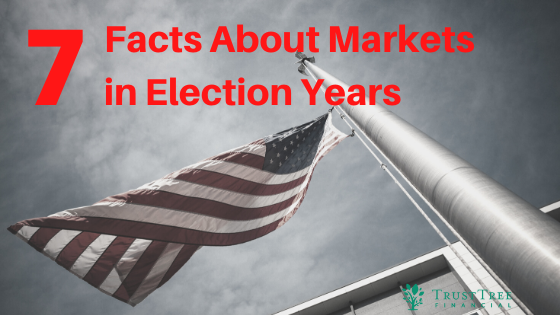 Presidential election years bring a lot of uncertainty and stress to people. Anyone not living under a rock can see it in social media, on TV, or just overhearing conversations in public.

In fact, during the 2016 election cycle, one study found that at least 50% of Americans were more stressed out because of the election. And this was true across all party lines.

So, why does that matter? Because stressing about election uncertainty can affect your mindset and trigger emotional investing decisions.

You can always look at historical data, like this study from Schwab and feel good about “election years” being predominantly positive. But can you bank on that – I’d say NO.

The good news is that you can avoid the frenzy around the upcoming election—and the stress and poor financial choices that may come with it—if you know the facts about the markets during presidential election years. Knowing these facts can help you keep a level head no matter what the outcome of the next election is.

7 FACTS ABOUT MARKETS IN A PRESIDENTIAL ELECTION YEAR

Past performance does not predict future results. That is, what happened in markets the last time a party was in the White House may not happen in the future.

Technology innovations, interest rates, and business profitability may have a greater influence on the market and the U.S. economy than presidential election results.

Since 1952, the Dow has increased an average of 10.1% in election years with a sitting president running for reelection.

When it comes to the stock market and investing, it really doesn’t matter which party wins. Normal variations in market returns eclipse any minor differences from president to president.

Long-term investment success depends more on the strength of the U.S. economy than the party in the White House.

The S&P 500 has an 86.4% success rate at predicting a White House win. Historically, if markets were down in the 3 months leading up to the election, the incumbent often lost.

“In the end, stressing about the ‘what ifs’ of the election just isn’t productive. Whatever happens on November 3, 2020, life will go on.”

It’s no secret that presidential election years are uncertain times—and that investors and the stock market like certainty.

It’s also no secret that the stock market is influenced by several factors—and that a presidential election may not even be the most significant one.

Of course, it can be easy to get caught up in campaigns, politics, and elections. And they do matter. Just not as much as you may think when it comes to investing.

Unfortunately, too many people let ideas about who could win office—and what they’ll do when they get there—run wild. And that can mean more stress and anxiety that overshadow sound investment choices and strategies.

In the end, stressing about the “what ifs” of the election just isn’t productive. As a financial adviser, I’ve seen how elections can fuel investors’ stress and lead them astray when it comes to their financial choices and their long-term goals. I also know how helpful it can be to have a sounding board when emotions run high. That’s why I’m here.

So, while the excitement of the election can be great inspiration to vote, don’t let it drive your investment choices. And, remember, whatever happens on November 3, 2020, life will go on. Instead of stressing about the “what ifs,” give me a call. I’m here to support you, and I can help you create a personal financial strategy for the election year and beyond.