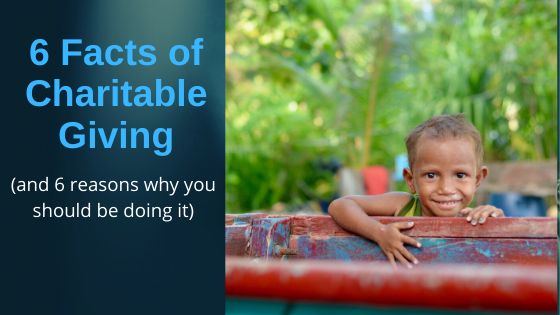 I’ve had this topic come up lately with clients – people wondering HOW MUCH SHOULD WE BE GIVING? HOW MUCH DO OTHER PEOPLE GIVE? It’s a welcome discussion, particularly with all the news events thus far in 2020.

So I did a little research and first wanted to share some great facts around giving. Some of these were new (and eye-opening) to me:

Americans are the most charitable in the world. This is based on per capita and per GDP. It’s not just because our country is one of the wealthiest in the world, but YES the uber-wealthy use it as a means of gaining respect and admiration. It’s notable however that other giving countries (Indonesia, Myanmar) are considered lower-middle-income. Another possible reason: Americans feel social pressure to do good, it’s possibly engrained in our culture more than other countries.

People give most of their money to religious charities. Giving is generally tied to one’s personal mission, and causes that are important to them (animals, health, education, human services, etc). Historically, religious groups have benefitted from large amounts of people giving to their local place of worship.

Giving in the United States is declining. This is worrisome to me, and I hope it reverses course. Since around 2014-2016, the share of U.S. adults donating has dropped, and approx. 20 million fewer households are giving today than in 2000.

One reason suspected for the decline is fewer people affiliating with a certain religion or attending religious services.  Also, the U.S.’s 2017 tax overhaul resulted in fewer people itemizing charitable deductions on their tax returns (note: recent law added back in a $300 allowance for everyone).

Almost one-third of gifts occur in December. And 10% of annual giving occurring in the last 3 days of the year! People tend to have more compassion around holiday time. (P.S. I would love to see this spread out more, if for no other reason than charities can do better planning throughout the year).

Most Americans give. In fact, 9 of 10 “give” in some way – even if it’s only volunteering their time and energy. Studies show that women volunteer more, and give more dollars, than men. These are hard-working Americans giving up more of their hard-earned dough, making our country one of the more “generous” ones out there. Which leads us to the last fact…

People give an average of 3% of their income each year. For some, its 2%, for many people of faith – it’s 10%.  What’s interesting about this is that people making less than $100k a year tend to give a higher percentage of their income than someone making $1mil a year. I’ve highlighted in yellow the divide of people making less than 6 figures, those making $100k-$2mil, and those over $2 million a year. People on the lower end of the economic scale tend to give more, percentage-wise, than those earning a $1mil a year! Said differently, people making in between $100k and $2mil tend to give the least!

What does this all mean? Not sure. But I hope it opens your eyes to the giving landscape.

And now I want to provide some of the reasons why I think you SHOULD give (or give more):

How to do it? This could be a topic for another day. But in general, I recommend making a budget. Involve your kids if possible. And plan ahead.

For instance, if your goal is to reasonably give 3% of your $80k income each year, that equates to $200 per month. Will you automate it by sending a check each month to certain charities? It may require some thought and conscious effort.

Here are some places to look and get some ideas, a larger resource called Charity Navigator and one that I use frequently TisBest.org. Search for your local area, or search by certain categories.

There are hundreds or thousands of great organizations out there. Have some fun with it. And best of luck helping make a difference in the world! You will certainly feel good about doing so.