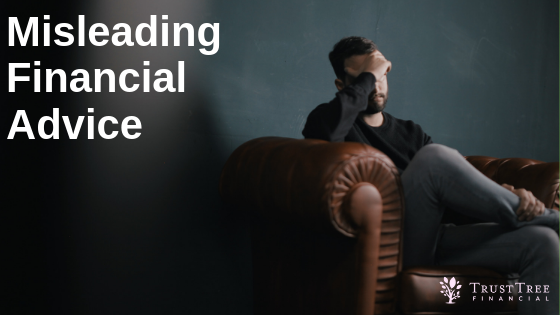 Over the past couple weeks I have been mildly entertained by several articles that discuss some of the worst financial advice that people have received. Bits of it are off-the-wall, but for the most part some common themes exist.

Some of these “financial nuggets” that go around are debatable at best. I won’t go so far as to call them wrong, but I will label them as misleading. I provide my thoughts on some of the more common ones below. Have you been strong-armed into any of these?

Buy as much house as possible. I see a lot of people qualify for a mortgage and think that just because they are approved for a certain amount, then they need to find a house for that amount. It really just means you should stay under that amount.

Usually way under that amount. Give yourself some breathing room!

I also believe that that renting, versus purchasing, is a solid option in many cases. Don’t like the idea of spending money on rent that you will never see again? Keep in mind that homeowners never recoup all the taxes, insurance, HOA fees, and upkeep… so owning a house doesn’t necessarily mean you will see the money return at some point.

Point being – it’s not always smart financial sense to buy.

Pay off student loans before anything else. For those with student loan debt, they face a decision of paying that down versus putting money towards many other financial needs. While initially this appears to make sense, as some well-known experts emphasize, my stance is not as strong.

One example is the do I pay my student debt first or save for my retirement conundrum. It would be reasonable to compare the interest rate you are paying to the rate your investments are growing. If your interest rates are low enough (say under 5-7%) than it may make sense to save while you are paying off the loans.

In many cases, it makes sense to balance your savings with debt payback.

Just get the degree, it will pay for itself. Obtaining a college degree that you enjoy and will eventually lead to a good job, fine. Makes sense. But don’t assume that college is the choice for everyone. And it really won’t make sense if the kid takes out large student loans!

Considering that roughly a quarter of all kids end up dropping out of college this is a substantial amount of our youth that not only never obtains a degree, but is saddled with debt at a very young age. If someone isn’t sure they have interest in a career requiring a college education, there isn’t anything wrong with going to trade school or at least waiting a little bit to make such a big financial commitment.

For the student who does go on to obtain a degree just for the sake of getting it, they often times switch careers anyways. Or at the very least, don’t get a high-enough paying job that they were expecting. The degree by itself doesn’t guarantee it was the right move.

Buy whole life insurance to fund your retirement. While in general I believe that this strategy may make sense in certain circumstances, I do not believe it is a strategy that most people should be exploring. Many an insurance salesman will lead you to believe it’s THE solution for retirement.

Insurance has many complexities and nuances that aren’t easily understood. Most people should explore retirement plans through work as well as IRAs first. If money is left over after those things, then sure, consider supplementing it with a permanent insurance product. It’s not for everyone though.

Pay off your mortgage instead of investing. This one might be the most debatable of the ideas listed above. On the surface, it sounds reasonable. Pros and cons for both can be made, and I won’t get into them here. In the end, it will depend on the individual situation.

Where do I stand on mortgage versus investing? Somewhere in the middle, leaning towards the investment side. All else being equal, I’d consider mortgage payoff as the more conservative (safer) option. But if someone can take a little risk and puts their money to work in longer-term investment vehicles, it usually makes more sense to not be in a rush to pay off that mortgage.

All of these strategies above can be picked apart all day long. I have biases but am also open to ideas. And typically, there is no wrong or right – more of an “it depends on the situation”. The take home here, pun intended, is to do your homework. Learns the ins and outs and/or work with someone to help guide the way.