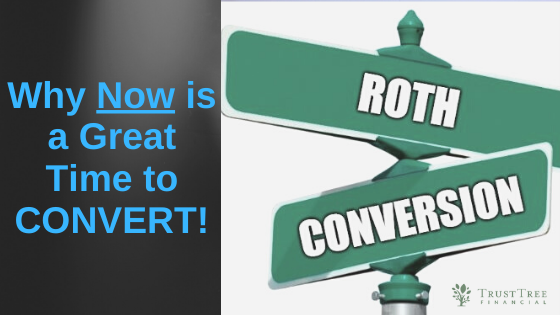 We’re going through some tough (and interesting!) times these days. Even if you fear the sky is falling, it’s important to be able to see things optimistically. I like to look through the noise for opportunities. Which led me to this idea – the current environment is ripe for Roth IRA conversions.

There are other distinctions between the two, as well as cases to be made for having one versus the other. I won’t get into those differences today, but do know that I am personally a big fan of the Roth and have many reasons why you should consider funding one. Practically speaking, it’s a good idea to have some in each. And since the Roth IRA has only been “born” since 1997, most people have the bulk of their money in Traditional IRAs.

A “Roth conversion” essentially turns a traditional IRA into a Roth IRA, and the most common advantage is that it can bring long-term tax benefits. People love the Roth for the qualified tax-free withdrawals! This is unlike most other retirement saving options, which distributions are subject to whatever tax rates are in place at the time. Those rates could be a lot higher than they are now.

Critics will say the biggest drawback is that a Roth conversion will likely cause you to pay tax on that conversion in the year you convert. Who wants to force themselves to pay taxes earlier than they have to? I always say it’s like paying a little bit of tax now instead of potentially a lot more later. So, there is a decision to be made. And you should have funds set aside to account for the additional tax burden.

Once it’s understood there is no tax break in the year of a Roth conversion, you can sit back and let time and compounding work for you. Assets in a Roth grow tax-free, and investors don’t pay taxes on withdrawals they make in retirement. Sounds great – right?

Let me tell you why NOW is a good time to do this:

So as far as timing, there may not be a better time than now.

Diving a bit further here are some reasons why a Roth conversion could make sense for you:

Reason #1 to Convert: Tax Rates Could Be Higher Down the Road

The 2017 Tax Cuts and Jobs Act (TCGA) reduced rates for most Americans, and unless something changes sooner – they will reset to those higher levels in 2026. For example, a married-filing-jointly couple with $160k of income recently saw their rate drop from 28% to 22%. That rate is relatively low looking at the history of income tax rates. And it’s probably a safe bet that they won’t be going lower in the future.

With market levels where they are, and if you think it’s going to rebound at some point…right now is a great time to do it. We are currently in a low tax rate environment thanks to last year’s TCJA, and you’ll be converting lower-valued assets.

Reason 2 to Convert: RMDs from Traditional IRAs could kick you into a higher bracket

The government will force you to take money out of your IRA once you turn 72. These “required minimum distributions” (RMD) could be substantial, especially if you have done a good job saving and investing your IRA. Imagine being forced to take $50k out and adding it to your taxable income. It could push you and the rest of your income into a higher bracket. Conversely, there are no RMDs needed to be taken from a Roth nor any tax owed on the gains.

With some planning and foresight, you could reduce your Traditional IRA balance through annual Roth IRA conversions. The thought is to reduce your IRA balance by age 72 so the taxes aren’t so hefty. Often a good strategy is to convert a little IRA money to a Roth each year after retirement and continue doing so until age 72.

Reason #3 to Convert: You can get the benefits of a Roth even if you earn too much to contribute to it directly.

The Roth has many attractive attributes, which is why the IRS places limits on allowing people to contribute to one directly. If you make too much money and are not allowed to contribute, you can convert to one. There are no income limits on conversions.

The Roth IRA isn’t the end-all-be-all for retirement savings, but it’s certainly an attractive option. If you think it can potentially help you, consider finding ways to fund it. Just make sure you understand the tax implications of such a move, both today and down the road.

Things can and will change, but today certainly creates an attractive opportunity worth considering.