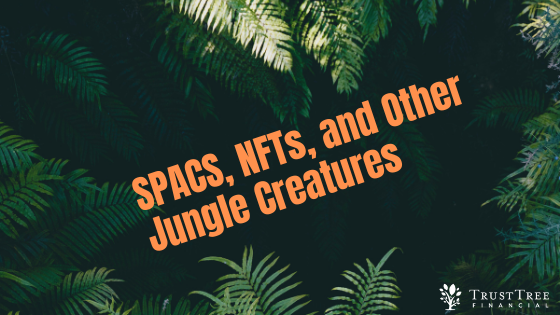 “The American marketplace is an economic jungle. As in all jungles, you easily can be destroyed if you don’t know the rules of survival. … But you also can come through in fine shape and you can even flourish in the jungle—if you learn the rules, adapt them for your own use, and heed them.” — Sylvia Porter

Is it just our imagination, or has there been an uptick lately in exciting new trading tactics for seizing riches from exotic new markets?

In today’s financial times, tides and fortunes can ebb and flow. And there will always be hot new trends.

After a year of sitting at home, an excitable generation of DIY traders has been replacing traditional leisure-time activities with online pursuits—including aggressive, Tweet-worthy trading for fun and profit.

The result? Waves of volatile financial feeding frenzies and overnight sensations. You have seen them online. They are egged on by freshly hatched social media stars, and a flood of flashy new trading platforms with captivating names like Robinhood.

The movement roughly launched in January 2021, when a Reddit-driven rally abruptly sent the prices of several unloved stocks like GameStop through the roof. More recently, special purpose acquisition companies (SPACs) have captured a lot of attention. “When SPAC-Man Chamath Palihapitiya Speaks, Reddit and Wall Street Listen,” observed a recent Wall Street Journal column. “Amateur traders hang on [Palihapitiya’s] every word for clues about his next target—and for the insults he hurls at the high-finance elite.”

Non-fungible tokens (NFTs) have also been taking the trading world by storm. As described in this the Hustle article:

“An NFT can represent any kind of digital asset: a piece of artwork, an audio file, a video clip, a plot of virtual land. The NFT isn’t actually the piece of artwork itself; it’s a piece of code on a digital ledger (blockchain) that points to where the artwork lives — usually on a server somewhere else.”

If you think of an NFT as being like a collectible—say, an autographed baseball card—but in digital format, you’re getting close to envisioning its worth. Similar to playing cards, people are collecting these pieces of code, typically exchanging them in cryptocurrency such as bitcoin.

How much is an NFT actually worth? However much the market decides.

Some are currently trading in excess of $1 million each!

NFTs have caught the attention of tech investors (Mark Cuban), the high-brow art world (Christie’s auction house), and major corporations (Nike) alike. Everyone from Lindsey Lohan to the rock band Kings of Leon is flooding the market with high-priced virtual creations of their own.

These and similar get-rich-quick possibilities may seem shiny and new. And some of the underlying infrastructure truly is groundbreaking. Like the Internet, electricity, and the wheel, intriguing innovations like blockchains, cryptocurrency, and NFTs may lead to incredible applications we can’t even imagine at this time.

Plus, at least on paper, there are those who have amassed rapid fortunes by being in the right place at the right time. Trading into the innovations, they’ve caught a wave of risk-laden opportunity; some have gotten very rich in return. Much of the action is highly reminiscent of the 1990s tech bubble. Remember when you can buy nearly any high-tech company at any price, and it seemed sure to pay off handsomely? Well … right up until most of them no longer did.

Time will tell whether these brave speculators manage to convert their good fortune into lasting wealth once today’s trends fizzle or fly. Because beneath it all, the laws of the jungle remain the same.

The question to be asked: do you want to be a sprinting speculator or a long-distance runner in the wilds of the stock market?

In his book, “The Psychology of Money,” Morgan Housel describes two types of market participants—short-term traders and long-term investors—and why it’s essential to know which one you are:

In yet another powerful piece, “Financial Implications of Robinhood Investors,” financial author Larry Swedroe weighed in. He took a look at a recent academic study that analyzed the new breed of stock market participants using Robinhood’s no minimum, zero-commission trading platform. The study found that Robinhood participants tend to be younger, less wealthy, and hungry for higher-volatility trades. In aggregate, “zero-commission investors behave as noise traders,” with a market impact similar to past noise trading.

Thriving in the Jungle

In other words, hot trends are business as usual in the financial jungle. Fortunes will rapidly rise overnight. But many will fade just as suddenly. A few will strike it rich. Far more will be left licking their wounds … if they’re lucky.

That’s a dicey way to patiently pursue your long-term financial goals. You may be seeking returns from the same market, but your end goals are entirely different from the noise traders. Remember these differences if you ever feel a little left out of all the excitement. It should address your concerns about whether they know something you don’t.

As 16th century Renaissance mathematician and gambler Gerolamo Cardano reportedly once said: “The greatest advantage in gambling lies in not playing at all.”