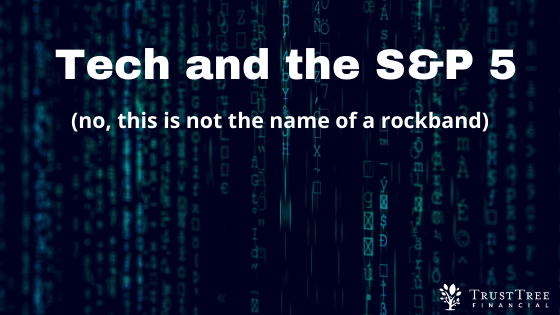 Although I observe, read, and learn a lot about the markets – I rarely have time to post about what’s going on. And I am typically busy doing planning with clients and rebalancing their portfolios. But here are some talking points and observations about the current landscape.

As a backdrop, I have been observing a phenomenon that the US market has undergone for decades – there are fewer stocks, but bigger. “The big are getting bigger” as they say. And the smaller companies are reducing in number (mostly due to M&A).

We also know that Covid-19 forced shutdowns, and caused a good-sized market pullback in the Q1 of 2020. Since those lows, we’ve seen 5 consecutive months of positive index returns. Client portfolios are higher, and the sentiment is brighter.

But what indexes are we talking about? Here’s a list of returns as/of August 30, 2020. I highlight some below:

One observation is that we are seeing great dispersion between growth and value, which happens over time, but the spread is dramatic today. This relationship seems to ebb and flow over time, each taking its turn so-to-speak.

The main success stories of late have come with large-cap growth. Not only are “value” stocks lower, but so are the bulk of “small” companies. International stocks are also still in the red. Blended portfolios tend to have a piece of all of these.

We’re also seeing the US markets boosted by a handful of stocks – not the majority of them.  I am talking about tech stocks in general, but 5 of the largest stocks more specifically. You know the names, but they are the current tech giants Apple, Google, Facebook, Amazon, and Facebook. I’ll refer to them as the “S&P5”.

Because of their growth and obtaining large chunks of market share (as you can see from the chart below), these largest 5 stocks recently have been accounting for a much larger percentage of the indexes. Specifically, these S&P5 account for nearly 25% of the S&P500, and 38% of the Nasdaq. As one would conclude from the chart, these are unprecedented levels – including during the tech bubble and the dot com era.

Technology is one of the 11 sectors of the S&P500, as is energy, financials, utilities, etc. So another interesting observation is the divergence of tech versus energy: We know that sector rotation occurs over time, but how about the main drivers of tech? Looking at a 5-year chart below, look at the difference of the market value of these S&P5 versus the “other” 495 companies in the index: Interesting, right? So it appears that the big are getting bigger (as of late anyway). Due to their sheer size, the market is moving based on a narrower list of companies. Wherever these stocks go, it’s inevitable the index will probably follow.

Said differently, if we are getting a pullback (like we have seen in September), these companies would have to lead it. And this is what we’ve also observed. Of course, the market, and the news, is a fluid situation.

It’s also interesting to point out that while the S&P500 was making new all-time highs in August 2020, less than 10% of stocks in that index were concurrently making new highs.

Why you may ask? Well, it was because of the S&P5 leading the charge! Approximately two-thirds of the S&P500 was underperforming the index (not just 50-50), with the median level of underperformance being -22%.

Looking at recent history concerning the largest stocks, as recent as 2010 Exxon was the largest company in the S&P500. Now it’s about the 40th largest. GE was at the top in the early 2000s and is no longer in the top 50. Meanwhile, companies like Apple and Amazon were still trying to break out 10 years ago.

Going back to 1990, only 5 stocks have individually claimed more than 4% of the index (Apple, Microsoft, Cisco, General Electric, Cisco Systems). So not only is this rare but typically their dominance has been short-lived. For one reason or another, things tend to revert to the mean.

What does this all mean for investors? Who knows. Will things be different this time? Possibly. 2020 has been unique in so many ways. It’s anyone’s guess, but certainly interesting to observe.