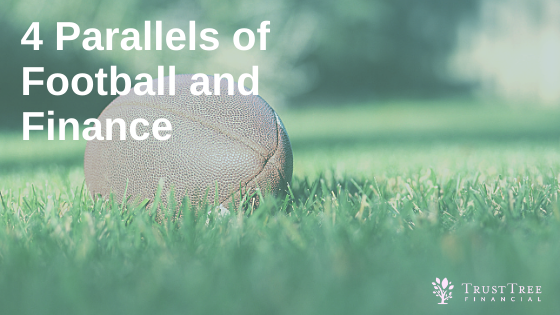 Football season is in full swing, and studies tell us that roughly 4 out of 10 people watch football on a regular basis. But how many of you see the parallels that the game of football has with your investing lives?

If you think about it, football tells us a lot about life. Many aspects of the game can be directly linked to finances and investing. Here’s my somewhat light-hearted view of some parallels that I see:

Have a game plan. No one expects a team to start a game without planning in advance. And just like investing, you just can’t wing it. Nothing irks me more than watching a team come to the line preparing for the next play and they form an “illegal formation”. Early mental preparation is important.

Football, like investing, is a fast-paced game with ebbs and flows. It’s often best to stick to your script. Things happen during the game which may cause you to adapt. It’s OK, be patient and don’t get shaken.

Avoid rookie Mistakes. We’re talking about things like fumbles and penalties. They are part of the game and you can work to minimize them, but they’ll usually come up regardless. And when they do happen, don’t be discouraged: battle through them and keep moving forward.

One penalty I see often – “delay of game”. Investors know they should get started sooner than later, but that doesn’t always happen. Just know that it’s never too late to start, you will just have to play catch up (aka the hurry-up offensive strategy). Make retirement planning a priority and benefit from the power of compounding. And don’t allow valuable seconds to tick off the clock.

Seek balance. Teams have to play both offense and defense. As general manager of your team, you have limited resources (money) but you have to spread out your spending on both sides of the ball. If all you want to do is play offense and pay for aggressive offense players, then expect to be exposed on the other side when it’s time to play defense.

Having balance also means having protection. For example, you will need good offensive lineman to protect your quarterback. Similarly, you need backup players at each position in case an injury pops up. By having things like an emergency fund and adequate insurance, you are preparing yourself for the unexpected things in your financial life.

Pick your style. Does your team like to run the ball, or consistently throw deep passes? Running the ball is more conservative and predictable. Throwing the ball has a wider variety of expected outcomes. Similar to using frequent blitzing on defense, it can either work out well…or it can burn you.

This parallels to how much risk you like to take with your investments. Most people would benefit from some type of a mixture. Your portfolio should be built similarly, you may have some accounts/investments that are built for growth but also some that are safer and meant to protect capital.

Realize that everyone has the opportunity to build a winning team (portfolio). If you want to have a successful financial future, consider the above analogies as it relates to the game of football. Put a combination of players (investments) together that work well together and each one having their own assignment (diversify).

Are YOU ready to get off the sidelines and make proactive changes you’re your financial future? As the general manager of your financial future, don’t be afraid to hire a skilled coach (professional advisor) who can help you with it. I want to see you smiling at the post-game show!