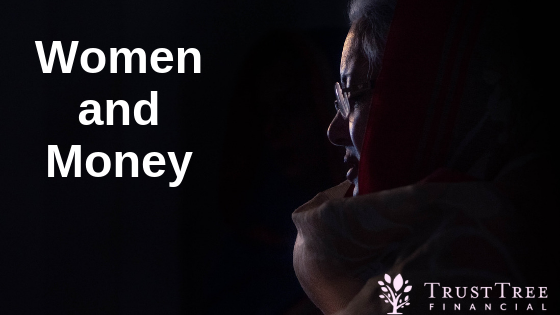 Finance is a male-dominated industry. According to Cerulli research, only 16% of financial advisors in the US are female. There have been initiatives to change this but currently, this is fact. It’s no wonder then, that women may feel out of place when they walk into a financial planner’s office.

Plus the topic of money is a taboo topic anyway – not many like to openly discuss money. Just like our weight or our previous dating history, most people find these to be a personal topics and keep it hush-hush. It’s not like you’ll hear this often: “Hey neighbor – how much do you make?”

But the truth is, it’s women who control a greater percentage of the wealth and a significant amount of consumer spending! They typically are making the decisions on setting doctors’ appointments, paying the bills, doing the household shopping, etc.

Here’s what else we know: women live longer than men (by 5 years or so). If you observed all 85 year-olds in this country, you will find that 2 out of 3 of them are female. And unfortunately we all know about the astronomical divorce rates that exist. Combine that with the trend that women have become more independent (remaining single, pursuing higher education, getting married at later ages, etc.) and it’s understandable that over time it’s women who own most of the nations’ wealth.

All that sets the stage for the following 5 “women and money” stats. These caught my eye recently and I wanted to share:

One in three women feels discouraged about her finances.

We can probably blame the gender pay gap as the primary reason why women aren’t as optimistic about their financial future. Lower paid individuals, regardless of gender, understandably may feel more discouraged or overwhelmed. This article suggests some creative ways to help bridge that gap.

Women would rather talk about death, than money.

Studies show that 4-out-of-5 women confess they refrain from discussing their finances from those they are close to. And 61% of women would rather talk about their own death than money. Yikes! Of note here is a trend in women’s magazines – did you ever notice they have very few articles about personal finances? And most also acknowledge they did not receive any financial education in high school, which would naturally start people behind the financial curve.

Women are typically better than men at managing their money.

The encouraging thing is that women have proven to be more financially responsible with their money. According to Experian, women tend to incur less debt, have higher credit scores, and stay more current than men with their payments. Experts also say women are more likely to get their families out of financial trouble, doing almost anything to keep the household afloat.

The average age of a female widow in the US is 59.

Depending on the study, I’ve seen this number as low as age 55 and as high as age 65. Regardless, a significant amount of the female population are in their 40s and 50s when their spouse dies. I’d be willing to bet that most women in their 40s are definitely not thinking about losing their spouse this early in the game. Truth is, it happens more often than we think.

Only 14% of widows made the financial decisions by themselves before their spouse died. Not only can spouses die early, but the surviving wife will likely live several decades longer. She will likely be in charge at some point!

I’ve personally worked with widows in this position. Many feel they will lose their money and initially are hesitant to change anything. The story that sticks in my mind is a client who inherited her husband’s IRA – he only owned 4 stocks and had success with them for many years. The surviving spouse now refuses to sell them, even though the circumstances have changed. She would benefit from better diversification but feels an emotional connection to them and does not want change. This is a challenging spot to be in.

What is a woman to do? Off the top of my head, I would say get involved (today) with the finances. As much as women are not currently involved, most say that they WANT to be. So set aside time to talk with your spouse. At a minimum, know where everything is and make sure you know how to access it.

Also I recommend having an idea what the plan will be if you do lose your spouse. At least think though it, if not discuss it. Will you pay off the mortgage? Relocate? Set aside money for kids college? Seek someone to assist with execution of the plan? Discuss these things with your spouse so when the time comes, at least you know a general plan and you know your partner’s feelings.

Because if/when it happens, it is an overwhelming amount of stress and devastation. The grief of losing a loved one is never easy. Understandably, many women look at their new financial challenges with paralysis. It does not have to be this way.

What am I – the financial professional – to do? As someone who works and breathes financial literacy, I take this challenge personally. It’s really a call-to-action for all professionals in my position, to focus on having these conversations with women as well as men. Personally, I always make an effort with couples, to involve the spouse as much as possible, keeping them educated and involved. I hear it from spouses directly, so I feel the appreciation firsthand. They appreciate me keeping them in the loop. And I will continue to do my part.